Recurrent Kneecap Dislocations – The Role of the Medial Patellofemoral Ligament 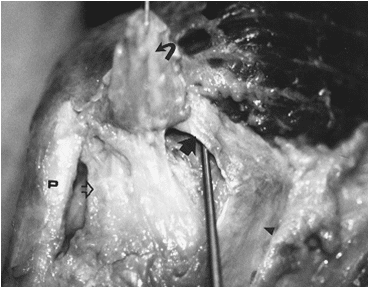 Conservative (that is non-surgical) treatment of acute kneecap dislocation

MPFL of the Knee

In cadaveric studies, one can see that if the MPFL is cut, the restraint to lateral kneecap dislocation becomes much less.

This is an example of a scan showing ruptured medial patellofemoral ligament after an acute lateral patellar dislocation:

What Happens to the Medial Patellofemoral Ligament After an Acute Lateral Patellar Dislocation?
•Torn in 94-100% of patients with LPD at open surgery
–Nomura, Int Orthop 1999
–Sallay, AJSM 1996
–Avikainen, CORR 1993
•Usually at or close to its femoral origin
•Multiple sites of injury to medial ligamentous restraints in 48%
–Elias, Radiology 2002

What Happens if the Medial Patellofemoral Ligament is Repaired?
•Experimentally  shown that repair or reconstruction of MPFL restores normal patellar tracking
–Hautamaa, CORR 1998
–Nomura, Knee 2000
–Sandmeier, AJSM 2000
This graph shows that repair or reconstruction of this important ligament restores the stability of the kneecap and prevents further lateral dislocation.

What does this information tells us?
The medial patellofemoral ligament of the knee is an important structure to prevent lateral patellar dislocation.
It is commonly torn during an acute lateral patellar dislocation.
It should be repaired if possible to prevent risk of further dislocations in the future.
If it cannot be repaired or if the patella has dislocated many times, the MPFL should be reconstructed.