Frozen Shoulder. What it is, what causes it and the different treatment options available in Singapore.

What Is Frozen Shoulder & Why You Should Care

Frozen Shoulder is a condition characterized by stiffness and pain in the shoulder joint. Signs and symptoms begin gradually, worsen over time and then resolve, usually within a two-year period. Seeking treatment from a frozen shoulder specialist is highly recommended.

Frozen shoulder refers to a shoulder that has become “frozen stiff” due to inflammation inside the shoulder joint resulting in capsular contracture.

This condition is typically described as having three stages:

Get Your Shoulder Checked Today

Adhesive Capsulitis and Pericapsulitis are common terms used to refer to the condition of frozen shoulder.

This results in a smaller shoulder volume hence leading to stiffness and pain.

The following picture shows the inside of a frozen shoulder. The shoulder joint capsule appears red and inflamed. 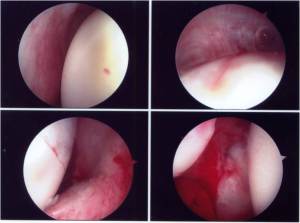 This is due to inflammation of the tissues, muscles and tendons around the shoulder joint which contributes to the pathology.

This picture shows the scar tissues in the subacromial space before and after surgical removal. 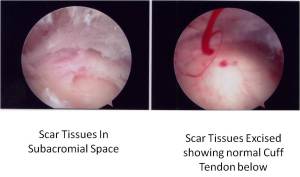 Find Out How Our Doctor Can Help You

Main symptoms of a frozen shoulder are:

Frozen shoulder without any known cause starts with pain. This pain prevents the patient from moving his arm. This lack of movement can lead to stiffness and even less motion. Over time, the patient is not able to do movements such as reaching overhead or behind.

The cause of frozen shoulder is often unknown.

There are two different types of frozen shoulder:

For example, a tear of the rotator cuff tendon in the shoulder joint causes pain which makes the sufferer moves the painful shoulder less and this gradually develops into a full-blown frozen shoulder.

It can also occasionally result from trauma to the shoulder.

Frozen shoulder most commonly affects patients between the ages of 40 to 60 years old, and it is two times more common in women than in men.

Patients with diabetes are at particular risk for developing a frozen shoulder. Their risk of developing frozen shoulder is five times  as common compared to non-diabetics. Other endocrine abnormalities, such as thyroid problems, can also lead to this condition.

Several systemic conditions such as heart disease and Parkinson’s disease have also been associated with an increased risk for developing a frozen shoulder.

Surgery is recommended if non-surgical treatment is not effective. This procedure (shoulder arthroscopy) is done under anaesthesia. During surgery, the scar tissue is released (cut) by bringing the shoulder through a full range of motion. Arthroscopic surgery can also be used to cut the tight ligaments and remove the scar tissue from the shoulder. After surgery, you may receive pain blocks (shots) so you can do physical therapy.

If you think you have frozen shoulder, or would like to know about the various treatment options by a frozen shoulder specialist in Singapore, please feel free to contact us.