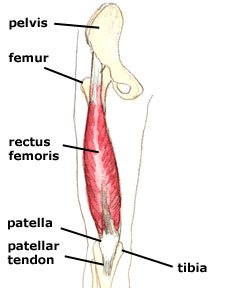 The quadriceps muscle group is vital for athletes who participate in sports that require running, jumping and kicking.

Of the four muscles that comprise this group, the rectus femoris is the most commonly strained and also has the most complex anatomy. It is one of the muscles that make up the hip flexors; a group of muscles that bring the legs and trunk together in a flexion movement.

Injury to the rectus femoris muscle is common in athletes, second only to the hamstrings among lower extremity injuries. It is the most common lower extremity muscle injury among soccer players.

The rectus femoris is vulnerable to injury because it crosses two joints, has a high proportion of type II, fast twitch muscle fibers and because, in an athletic kicking motion (soccer, football, martial arts), it undergoes forceful eccentric contraction while passively stretched at the onset of the forward swing phase.

The most significant of the other risk factors for muscle strain is recent or remote injury to the muscle.

Re-injury often occurs at a different location within the muscle or, if in the same region previously affected, is seen at the margin of a region of scarring.

Rupture of the Rectus Femoris
The rectus femoris is one of the powerful quadriceps muscles. A rupture of the tendon at the top of the muscle near the hip can result from overuse or explosive loads on the muscle such as in kicking or sprinting. .

Inflammation of the muscle causes pain in the groin during physical exercises that use this muscle. The patient may experience pain during knee raises when the muscle is ruptured or inflamed.

A surgery may be necessary if the muscle is torn. 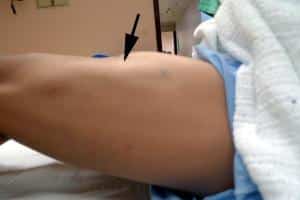 Symptoms of a rectus femoris injury include: 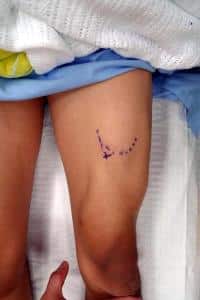 This injury can be missed. Some athletes may not seek medical attention thinking that the injury may be a minor muscle strain. Delayed diagnosis is common.

For cases where the hip flexor muscles are stretched (minor strain):

The doctor may recommend exercises to help stretch and strengthen the hip flexors. While resting the area, the patient may want to do exercises that do not strain hip flexors, such as swimming.

For a severe strain, a physiotherapist may work with the patient to:

For cases of complete tears or ruptures, surgery may be deemed necessary in order to repair or reattach the torn tendon.