Hip impingement or Femoroacetabular Impingement (FAI) occurs when something prevents the smooth, painless, and free movement of the ball-and-socket joint – basically, it is a condition of too much friction in the hip joint, thus creating damage to the hip joint.

The damage can occur to the articular cartilage (smooth white surface of the ball or socket) or the labral cartilage (soft tissue bumper of the socket).

FAI is common in high level athletes, but also occurs in active individuals.

Hip impingement may be caused by a misshapen femoral head, deformed femoral neck, or a hip socket that covers too much of the femoral head. Over time, repetitive “bumping” or impingement of the femur on the rim of the acetabulum leads to cartilage and labral damage. 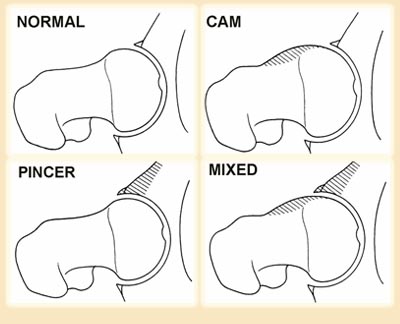 The Cam form describes the femoral head and neck relationship as aspherical or not perfectly round. This loss of roundness contributes to abnormal contact between the head and socket.

Most of the time, the Cam and Pincer forms exist together.

In the early stages, there may be no symptoms associated with hip impingement or symptoms may be mild or vague. Some typical symptoms include:

Diagnosis begins with a complete medical history and a physical examination. During the physical exam, the range of motion of the hip joint and presence of impingement will be assessed.

Patients who present with symptoms of FAI often complain of pain in the groin after prolonged sitting or walking. Many athletes often describe pain in the groin with deep flexion or rotation of the hip during activity. The pain can be described as a dull ache or a sharp sensation. Occasionally, a popping or clicking in the front of the hip is described. Pain can also be felt along the side of the thigh and in the buttocks. It is important to rule out other causes of hip pain such as the low back or abdomen.

Radiographs of the pelvis are used to confirm the diagnosis of FAI. Often an MRI or CT scan is performed to further assess the cartilage, labrum, and shape of the bones.

Other tests may be required, including:

Treatment of FAI begins with conservative, non-surgical methods. Rest, activity modifications, careful use of anti-inflammatory medications, and a course of physiotherapy are often successful in alleviating symptoms. An injection of the hip joint with anesthetic can also provide some relief as well as diagnostic information in patients with symptoms which are unresponsive to treatment.

In some cases, surgical intervention is recommended.

In some cases, an osteotomy (literally “bone cutting”) procedure can be performed in such a way that it relieves the impingement of the hip joint. By realigning the joint properly, the abnormal contact can be reduced or eliminated.

An abnormally shaped femoral head or hip socket can often be reshaped with osteoplasty or debridement. In such cases, the surgeon can “clean” or “sculpt” the ball-and-socket joint for a smoother fit.

For young, athletic individuals, arthroscopic or open repair of the joint may be appropriate. Arthroscopy is a specialized, minimally invasive procedure to repair the joint. Open surgery is indicated for more severe cases. Both arthroscopic and open procedures can provide excellent clinical results.

After surgical repair, the patient typically undergoes a period of physical rehabilitation that can last three to four months. Most patients resume normal activities after FAI surgery in six weeks, but full recovery may take up to six months.

In some cases, people with hip impingement may need to have a total hip replacement.

The choice of treatment depends in part on the patient’s condition, amount of arthritis in the joint, patient’s age and activity level, and specific preferences.