The rectus femoris muscle is one of the four quadriceps muscles that sits in the middle of the front of the thigh.

The rectus femoris attaches from the pelvis to just below the knee (on the patellar tendon.) It is responsible for knee extension and hip flexion.

The other muscles of the quadriceps include the vastus medialis, the vastus intermedius and the vastus lateralis.

It is one of the muscles that make up the hip flexors; a group of muscles that bring the legs and trunk together in a flexion movement. 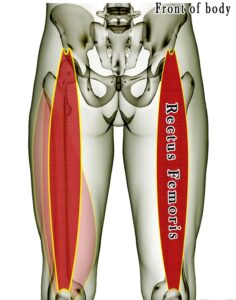 Injury to the rectus femoris muscle is common in athletes, second only to the hamstrings among lower extremity injuries.

It is the most common lower extremity muscle injury among soccer players.

The rectus femoris is vulnerable to injury because it crosses two joints, has a high proportion of type II, fast twitch muscle fibers and because, in an athletic kicking motion (soccer, football, martial arts), it undergoes forceful eccentric contraction while passively stretched at the onset of the forward swing phase.

The most significant of the other risk factors for muscle strain is recent or remote injury to the muscle.

Re-injury often occurs at a different location within the muscle or, if in the same region previously affected, is seen at the margin of a region of scarring.

The most proximal rectus femoris tendons may be injured at or just distal to their origin.

The same mechanism of injury in a skeletally immature athlete results in avulsion fracture of the AIIS, at the origin of the direct head, owing to the vulnerability of the open apophysis.

Rectus femoris muscle injury usually consists of a myotendinous strain centered on the indirect or direct head or, less commonly, myofascial junction injury, at the periphery of the muscle.

Rupture of the rectus femoris

The rectus femoris is one of the powerful quadriceps muscles. A rupture of the tendon at the top of the muscle near the hip can result from overuse or explosive loads on the muscle such as in kicking or sprinting. .

Inflammation of the muscle causes pain in the groin during physical exercises that use this muscle.

The patient may experience pain during knee raises when the muscle is ruptured or inflamed.

An operation may be necessary if the muscle is torn.

He was playing football when he felt a muscle over the front of his right hip “tear”. He had a sudden onset of right groin pain and was unable to continue running. 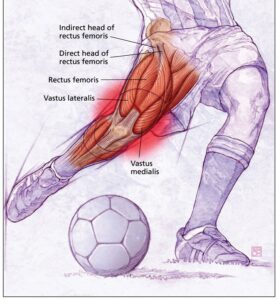 Examination showed tenderness over the front of his right hip and proximal right thigh with weakness in right hip flexion.

A clinical diagnosis of a possible right quadriceps muscle tear was made.

An MRI scan of his right thigh was ordered. The MRI confirmed a tear of the direct head of the right rectus femoris. 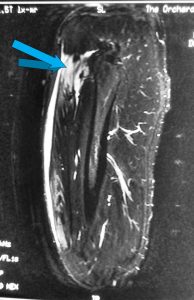 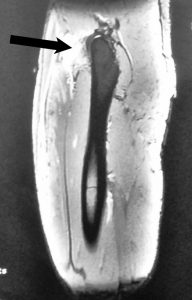 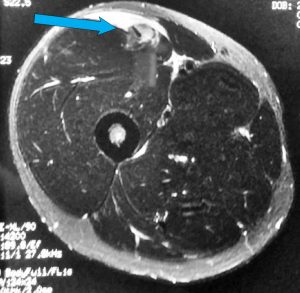 He was offered surgical repair of the torn rectus femoris.

A 6 to 8cm longitudinal incision was made just lateral to the anterior superior iliac spine (ASIS) and moving distally.

The lateral cutaneous nerve of the thigh and the branches of this nerve were identified and carefully protected during the surgical exposure.

The plane between the sartorius muscle and tensor fascia lata was developed. 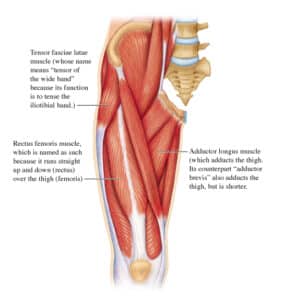 The torn rectus femoris tendon was found, and the torn tendon was reattached to the anterior inferior iliac spine.

Postoperatively, passive range of motion was initiated for the patient’s hip for 4 weeks, with weightbearing (as tolerated) in a knee brace locked in extension. He started active range of motion at 6 weeks after surgery. He was able to participate in sports (including sprinting) without any limitations by 3 months post-surgery.