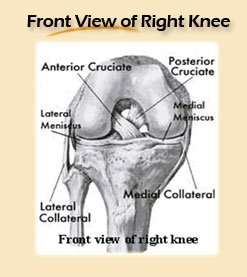 The PCL is a much larger ligament in the knee compared to the ACL. It runs from the back of the shin bone and inserts into the front of the medial aspect of the thigh bone called the medial femoral condyle.

The PCL resists backwards motion of the lower leg. Unlike the ACL, which is mainly functional during certain high risk athletic activities, the PCL is important and is functioning almost all the time even during simple walking.

Many times a posterior cruciate ligament injury occurs along with injuries to other structures in the knee such as cartilage, other ligaments, and bone.

Injured ligaments are considered “sprains” and are graded on a severity scale.:

A PCL injury occurs when a direct blow to the front of the knee or leg just below the knee (tibia) creates a large sudden force directed backwards. This puts a significant amount of stress on the PCL. The stress in the ligament is even higher when the knee is flexed (bent) closed to 90°. The posterior cruciate ligament then stretches to the point of mechanical failure which is considered a tear.

This can happen when someone is tackled in football below the knee from the front or when someone in any sport lands forcefully directly onto their knee with their knee simultaneously bent.

The PCL can also tear in this manner when in a head-on motor vehicle collision the vehicle’s dashboard strikes directly against the knee.

Sometimes the PCL can be stretched and subsequently torn by forceful hyperextension (bending backwards beyond straight) occurring to the athlete’s knee. This may occur when, in football, a player is hit on the legs just below the knee from the front and their knee hyperextends because their foot is firmly planted in the playing surface. This mechanism, especially when the knee twists during the injury, can lead to tearing of other important knee structures beyond simply the PCL.

The symptoms during an acute PCL injury is very similar to that of an ACL injury. There will be pain, swelling and restriction of knee movement.

Subsequently when the person recovers from the acute episode, the symptoms may be one of instability or pain in the front of the knee when walking up or down stairs. The incidence of overt instability of the PCL injured knee is less frequent compared to an ACL-deficient knee.

In chronic cases, patients may also have arthritis in the kneecap and inner aspect of the knee joint. Some patients have no symptoms and can carry on with their daily activities.

Signs and symptoms of a posterior cruciate ligament injury may include:

The doctor will examine both knees, comparing the injured knee with the uninjured one. A check of the injured knee for swelling, deformity, tenderness, fluid inside the knee joint and discoloration is done. After determining the knee’s range of motion (how far it can move in all directions), the doctor will pull against the ligaments to check their strength. The patient will be asked to bend the knee while the doctor gently pushes forward on the lower leg where it meets the knee. If the PCL is torn, the lower leg can be moved backward in relation to the knee. The more the lower leg can be moved away from its normal position, the greater the amount of PCL damage and the more unstable the knee.

A Posterior Drawer test can also be done – the shinbone (tibia) is pushed back while the knee is bent 90 degrees. If the tibia moves more than five millimeters backward, it is likely that the PCL has been torn.

X-ray – while an X-ray can’t detect ligament damage, it can reveal bone fractures. Patients with posterior cruciate ligament injuries sometimes experience avulsion fractures — in which a small chunk of bone, attached to the ligament, pulls away from the main bone.

Magnetic resonance imaging (MRI) – this painless procedure uses radio waves and a strong magnetic field to create computer images of the soft tissues of the body. An MRI scan can clearly show a posterior cruciate ligament tear and determine if other knee ligaments or cartilage also are injured.

Arthroscopy – if it’s unclear how extensive the knee injury is, the doctor inserts a tiny camera into the knee. This is the best way to examine a partial tear for it allows the doctor to gently pull at the PCL and determine the extent of the damage. This procedure is done on an outpatient basis and is relatively pain-free.

A Grade III injury signifies a complete rupture and the tibia sags backwards even further. It is likely that when a Grade III injury occurs, there are other ligaments torn along with the PCL. It is important to scrutinize the type of PCL injury a patient sustains because there are significant treatment implications, especially for a Grade III or combined ligament injury.

A partial PCL tear, Grade I and II, are typically treated non-operatively with a long course of intensive physical therapy to strengthen the surrounding muscles controlling the knee.

When the PCL pulls off a small piece of bone from the back of the lower leg (tibial avulsion), the PCL may be surgically repaired. If the bone fragment is large enough a screw can be place to secure the piece of avulsed bone back to where it was originally.

However, in the majority of PCL injuries, the ligament tears in the middle of the structure. In this case, the PCL must be reconstructed which refers to replacing the entire ligament with what is known as a graft.

The PCL can be reconstructed surgically using either a piece of the patient’s own tissue (autograft) or a piece of donor tissue (allograft).

With an autograft, the surgeon typically replaces the torn PCL with part of the patient’s own patellar tendon (the tendon below the kneecap) or a section of tendon taken from a large leg muscle (eg. hamstring). With an allograft, tibialis anterior tendons is usually used.

After surgery to reconstruct the PCL, the patient will wear a long-leg knee brace and gradually begin a rehabilitation program to strengthen the leg muscles around the knee.

Physical therapy will begin 1 to 4 weeks after the surgery. How long it takes to recover from a posterior cruciate ligament injury will depend on the severity of the injury. Combined injuries often have a slow recovery, but most patients do well over time.

It may be several weeks before the patient returns to a desk job – perhaps months if the job requires a lot of activity. Full recovery typically requires 6 to 12 months.