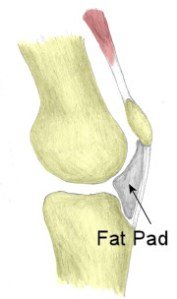 Fat Pad of the Knee Joint

The infrapatella fat pad (sometimes known as Hoffa’s pad) is a soft tissue that lies beneath the patella (kneecap) separating it from the femoral condyle (end of the thigh bone).

In situations where forces are directed at the patella it acts as a shock absorber, thus protecting the underlying structures.

In the case of a forceful direct impact to the kneecap, the fat pad can become impinged (pinched) between the femoral condyle and the patella. As the fat pad is one of the most sensitive structures in the knee, this injury is known to be extremely painful. This condition is normally long-standing as it is aggravated by extension or straightening of the knee joint. Hence the fat pad comes under constant irritation and may become significantly inflamed.

It is also termed Hoffa’s Syndrome.

Fat pad impingement symptoms include tenderness around the bottom and under the kneecap. Patients may have a history of being able to over straighten the knee, called knee hyperextension or genu recurvatum. In some cases the bottom of the kneecap may be tilted outwards due to swelling underneath.

Positive Hoffa’s test – with the patient in lying with their knee bent, the examiner presses both thumbs along either side of the patellar tendon, just below the patella. The patient is then asked to straighten his leg. Pain and/or apprehension of the patient is considered a positive sign for fat pad impingement.

Treatment of this condition is normally by conservative methods such as:

If conservative treatment does not work then surgery may be advised. This may involve the complete or partial removal of the fat pad itself.

Two tiny holes on either side of the lower part of the kneecap allows the surgeon to visualise the problem using a camera system and a small motorised shaver to remove the impinging fat pad.

The pain can go away immediately after the surgery.