Pigmented villonodular synovitis or PVNS is a joint disease characterized by inflammation and overgrowth (non-cancerous) of the joint lining. It is a joint problem that usually affects the knee. It can also occur in the shoulder, ankle, elbow, hip, hand or foot. 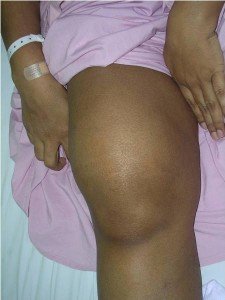 When a person has PVNS, the lining of a joint becomes swollen and grows. This growth harms the bone around the joint. The lining also makes extra fluid that can cause swelling and make the joint hurt.

PVNS is not common. It usually affects people 20 to 45 years old, but it can also occur in children and people over 65 years old. Both men and women can suffer from this problem.

The exact causes of PVNS is not known. Some people with PVNS remember that they hurt their joint at some time in the past.

For unknown reasons, some or all of the synovial lining tissue of a joint occasionally undergoes a change and becomes diseased, wherein the joint lining tissue becomes thick and overgrown and accumulates a rust-colored, iron pigment known as hemosiderin. Strange, foamy cells and large (so-called “giant”) cells with many nuclei also appear.

The overgrowth of the joint lining tissue can occur diffusely throughout a joint by way of a generalized thickening of the entire lining membrane, or a localised area of synovial membrane can overgrow and form a discrete nodule (tissue mass) that remains attached to the rest of the internal joint lining by way of a stalk.

While this disease process does involve abnormal tissue growth, it is uniformly benign and has not been known to metastasize as do malignant growths. PVNS can be considered a benign, “neoplastic” (tumor growth) process, with some varieties being more aggressive in their growth and thus harder to treat, and other varieties being less aggressive in their growth and thus easier to treat.

It can also cause pain due to erosion of the articular cartilage of the joint by the locally aggressive tumour.

Sometimes the patient with PVNS may present with acute swelling and pain in the knee. There may be a history of pain after getting up from a squatting position. The knee joint may become locked due to the tumour blocking knee extension. 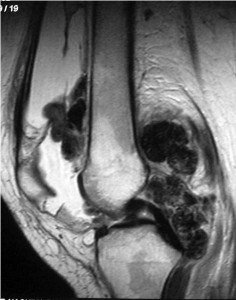 Nodular Tumours in front and behind the knee

PVNS can look like arthritis and some other conditions.

After a physical examination, x-rays of the affected joint may be useful.

The doctor may also want to draw some fluid from the joint and test it.

Another test, magnetic resonance imaging (MRI), takes a “picture” of the joint.

Bone lesions caused by the disorder are removed and bone grafting is performed as needed. Sometimes, radiation therapy may be considered as a treatment option. In some cases, a total joint replacement is needed to relieve symptoms when PVNS causes significant joint destruction.

Find out more about other related knee conditions and treatments from our knee specialist in Singapore.