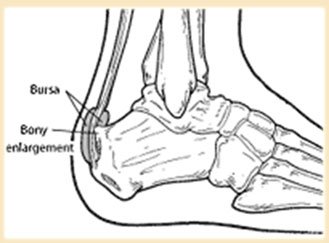 A bony growth that appears at the back of the heel bone can occur. This growth is called an exostosis (a benign cartilaginous growth) and is known as Haglund’s Deformity. This bony prominence can rub against the overlying Achilles tendon and causes pain in the tendon. A small sac (called bursa) that lies between the bone and the Achilles tendon usually becomes inflamed and swollen. This is called retrocalcaneal bursitis. The syndrome is caused by repetitive impingement of the bursa between the ventral aspect (front) of the Achilles tendon and the posterosuperior calcaneal prominence (heel spur). Typically, patients have pain when they start to walk after a period of rest.

Haglund’s deformity can occur in one or both feet. The signs and symptoms include:

Haglund’s Disease is characterized by pain and tenderness at the posterolateral aspect of the calcaneus (heel bone) where a calcaneal prominence (heel bone spur) can be palpated. This entity also is known as ‘‘pump-bump.’’ A distinction between Haglund’s disease and other pathologic conditions, such as a superficial Achilles bursitis (inflammation), must be made. Haglund’s syndrome involves a painful swelling of an inflamed retrocalcaneal bursa (a small fluid filled sac located at the back of the heel), sometimes combined with the degeneration of the fibers of the Achilles tendon directly at its insertion into the heel bone (insertional tendinopathy of the Achilles tendon). MRI of Haglund’s with Retrocalcaneal Bursitis

There is usually pain in the Achilles tendon insertion into the calcaneus (heel bone) posteriorly (behind). The Achilles tendon can be thickened (swollen) and tight. There is pain in the retrocalcaneal bursa (see the 1st picture in this article). A check for high arch of the foot as well as the heel from the back with the patient standing is done to make sure there is no heel varus (the heel points inwards when standing). These physical signs usually point to poorer results with treatment. An X-ray of the heel can be done to look for any Haglund’s exostosis or deformity. An MRI scan can be done. This is useful to diagnose Achilles tendinosis (which is related to the Haglund’s bump), swelling of the sac between the Haglund’s bump and Achilles tendon (retrocalcaneal bursitis).

A Non-surgical treatment of heel spur and Haglund’s deformity is aimed by a foot and ankle specialist in Singapore at reducing the inflammation of the bursa. While these approaches can resolve the bursitis, they will not shrink the bony protrusion. Non-surgical treatment can include one or more of the following:

If non-surgical treatment fails to provide adequate pain relief, surgery may be needed. Operative heel spur treatment in Singapore consists of removal of the inflamed bursa and resection of the bony prominence. This can be done by the traditional open surgical technique with a 3cm to 4cm scar or a minimally invasive endoscopic technique using 2 small stab incisions. A minimally invasive procedure to remove Haglund’s bony prominence is called Endoscopic Calcaneoplasty. Endoscopic Calcaneoplasty The operation is performed under general or regional anesthesia with the patient in a prone position. 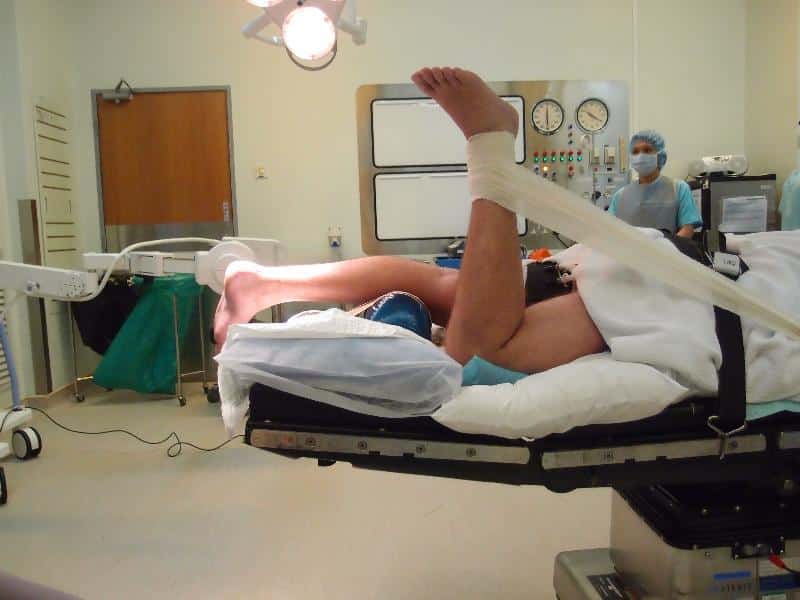 The patient is in a prone position. The opposite leg is held away from the surgical field.

Fluoroscope (x-rays) is used to localise the position of the Haglund’s exostosis. 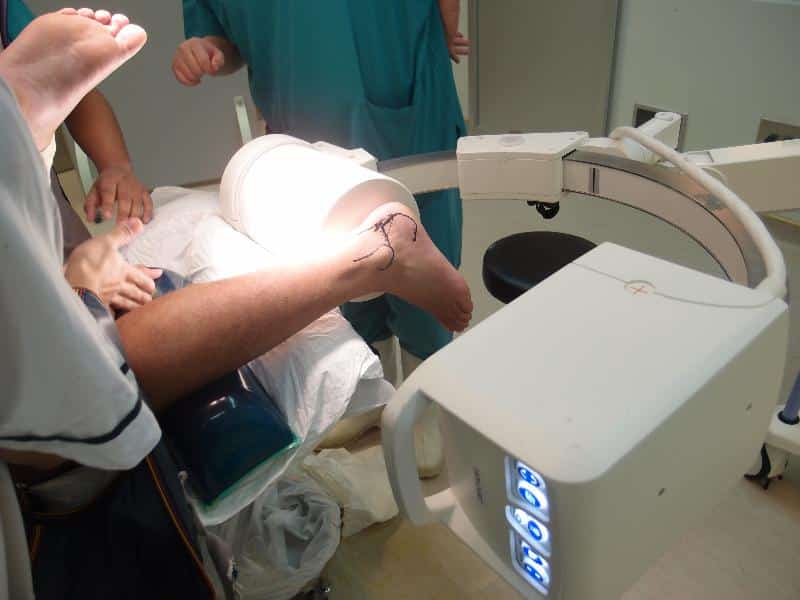 The Haglund’s exostosis is exposed. 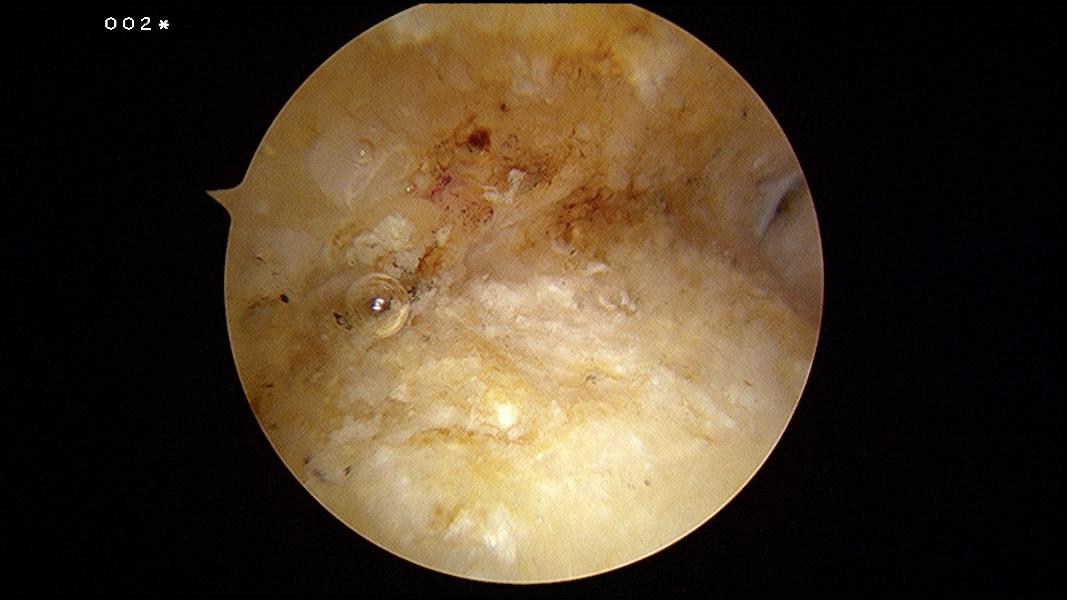 When the foot is brought into full dorsiflexion, the impingement site is determined. 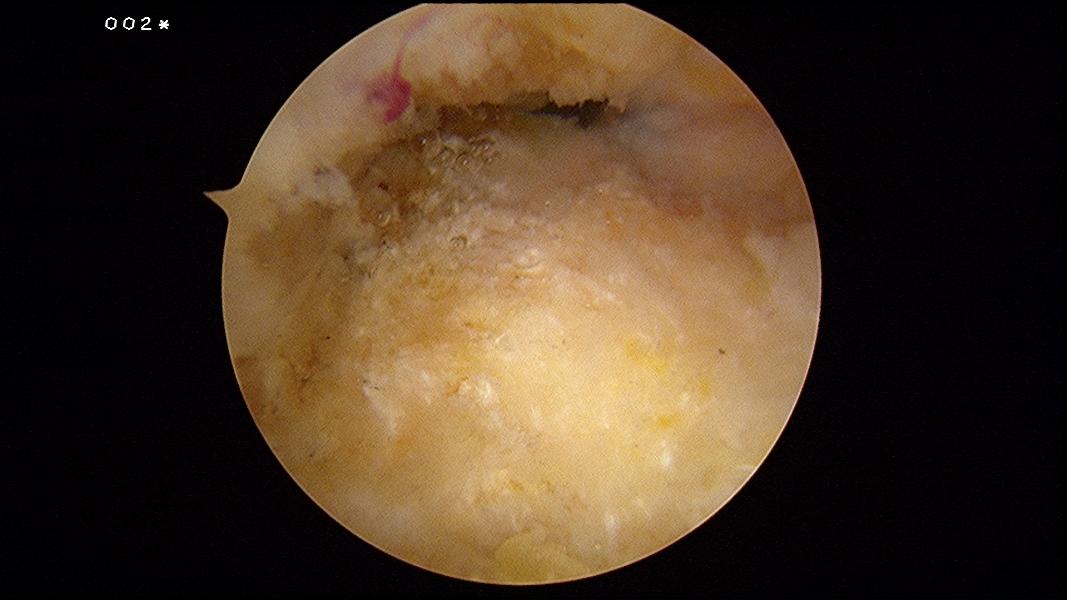 Haglund’s exostosis impinging the Achilles tendon with foot in dorsiflexion

A 4.0mm hooded arthroscopic burr is used to remove the Haglund’s exostosis. All of the time the opening of the burr is facing the bone. The foot is placed in full plantarflexion and the posterior superior bone rim can be removed. Burring away the Haglund’s exostosis

Upon completion of the procedure, the exostosis should be flattened and the insertion of the Achilles tendon into the heel bone should be clearly seen. Completion of Removal of Haglund’s exostosis 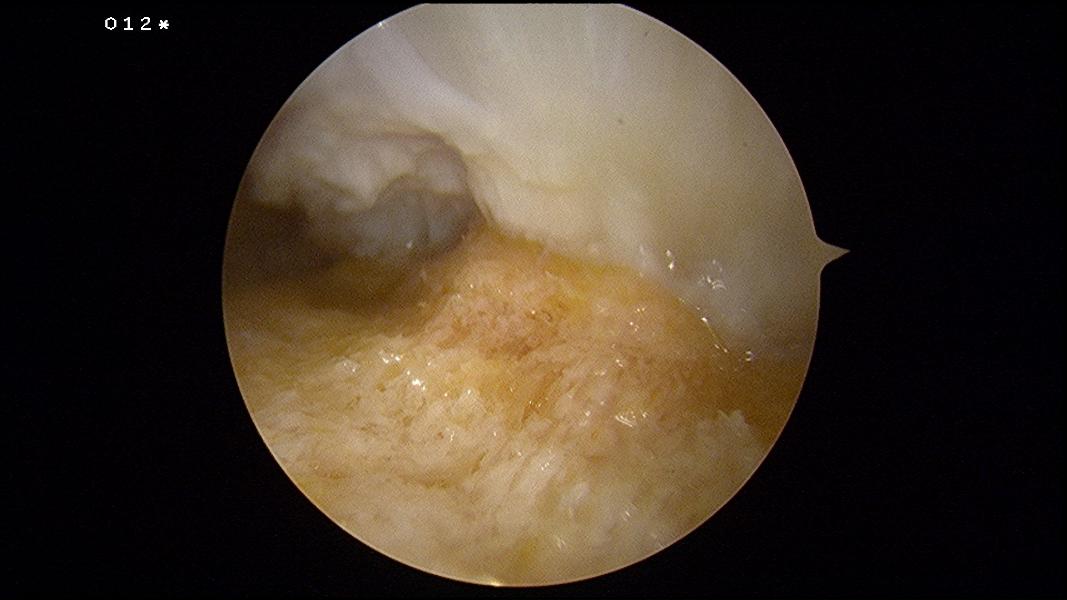 An intra-operative fluroscopy (x-rays) to confirm complete removal of the Haglund’s protruberance:

This surgical scar after skin closure:

Post-Surgical Recovery The patient is allowed to walk with the help of crutches and avoid bearing weight in his operated foot for the next 3 weeks. The operated foot should be elevated for at least 3 to 5 days. The surgical wound should heal in 14 days after surgery and the stitches are removed. The patient can start putting more weight on the operated foot from 3rd week onwards. He can resume running in 3 months’ time. The success rate of this procedure has been quoted to be 90%.