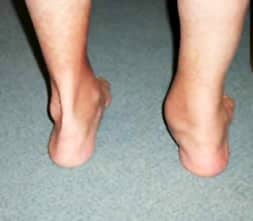 Posterior Tibial Tendon Dysfunction (PTTD) is typically caused by a problem with a tendon on the medial side of your foot called the Posterior Tibial Tendon that is not functioning well. As a result, the tendon may not be able to provide stability and support for the arch of the foot, resulting in flatfoot. This results in flattening of the foot. PTTD is often called ‘adult acquired flatfoot’ because it is the most common type of flatfoot developed during adulthood.

The posterior tibial tendon attaches the calf muscle to the bones on the inside of the foot. The main function of the tendon is to hold up the arch and support the foot when walking.

Patient may experience pain in the inner side of the foot when walking. The affected foot appears to roll outwards (the sole of the foot is trying to face outwards) when walking. This is called over-pronation of the foot. And the back of the heel may start to point outwards (heel valgus). Over time, the ability to tip toe on that foot as the posterior tibial tendon stretches out may be lost and the tendon may eventually tear. Signs and Symptoms of Posterior Tibial Tendon Dysfunction (PTTD) include: 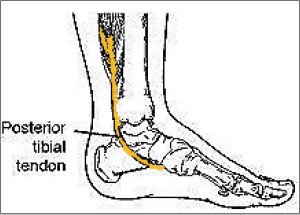 The posterior tibial tendon can be injured from:

It is more common in women and in people older than 40 years of age. Additional risk factors include obesity, diabetes, and hypertension.

PTTD is a progressive condition. Early treatment is needed to prevent relentless progression to a more advanced disease which can lead to more problems for that affected foot.

Surgery should only be done if the pain does not get better after a few months of conservative treatment.

The type of surgery depends on the stage of the PTTD disease. It it also dictated by where tendonitis is located and how much the tendon is damaged.

Surgical reconstruction can be extremely complex.

Some of the common surgeries include:

For other ankle & foot conditions and treatments, click on the links below and learn more: