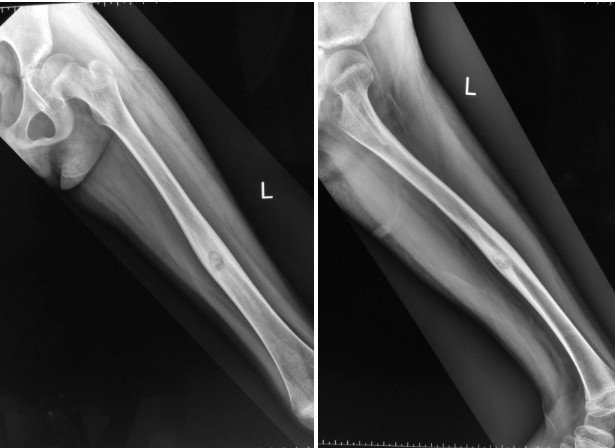 An osteoid osteoma is a benign bone tumour that arises from osteoblasts (cells that make bone) and was originally thought to be a smaller version of an osteoblastoma.

The tumour can be in any bone in the body but are most common in long bones, such as the femur and tibia.

They are benign bone forming tumours that typically occur in children (particularly adolescents).

They have characteristic lucent nidus <2 cm and surrounding solid periosteal reaction and classically cause night-pain that is relieved by the use of salicylate (aspirin) analgesia .

A 10-year old girl had been having nightly pain in her left thigh. This problem started 3 years ago at the age of 7.

This is what the father described in an email to me:

“I have a daughter, now she is 10 yrs old. From 7 yrs old she used to wake up at night, and told us that her left thigh in pain and cannot sleep. And i already check up several doctor, do many tests and they all said that’s she is ok, everything normal, may be her pain is “growing pain”. This past year, the pain almost every night come, but after i gave her a little doses of ibuprofen or paracetamol, suddenly the pain reduce, and she can sleep well.”

This story is a typical presentation of a child with osteoid osteoma.

The child was able to walk normally.

The left thigh showed muscle atrophy. This was due to disuse atrophy from pain. There was no palpable lump or swelling in the left thigh.

There was also no tenderness in her left thigh.

X-rays of the left femur showed the characteristic nidus surrounded by a zone of reactive bone.

CT-scan was done to further evaluate the lesion. It confirmed the diagnosis based on the typical features.

The CT-scan also showed muscle atrophy of the left thigh muscles compared to the right thigh.

Percutaneous CT-guided radiofrequency ablation of the lesion was performed under general anaesthesia in the Radiology Suite.

As the heat generated to ablate the tumour can spread to surrounding tissues, it is important to ensure that the nearly neurovascular structures are not too close to the zone of injury.

Under CT-scan guidance, a needle is inserted from the front of the thigh to inject contrast fluid to hydro-dissect the tissues at risk from the zone of heat injury.

A bone trephine (sharp metal awl) is used to create a channel in the femur cortex to allow the radiofrequency probe to enter the femur bone and into the osteoid osteoma.

A biopsy of the tumour is taken with the awl and the contents sent for histology.

The radiofrequency probe is next inserted into the tumour and the heat energy generated by the machine is used to ablate the tumour.

There is no incision on the left thigh, just a small puncture wound.

Her left thigh pain resolved immediately after the procedure.