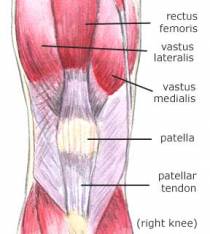 Avulsion of the Vastus Lateralis Tendon From Doing Gym Squats

From a knee specialist in Singapore, A rupture can in principle occur to all muscles in the thigh, however, ruptures most often happen in the anterior muscle (M quadriceps femoris) which has the function of stretching the knee and flexing the hip. The anterior thigh muscle consists of four muscles (M vastus lateralis, M vastus medialis, M rectus femoris and the deep lying M vastus intermedius).

A 24-year-old man presented with painful swelling over the front and outer aspect of his right knee after an injury when doing a squat in the gym with weights. He distinctly heard a loud “Pop” when the injury occurred.

He was able to walk but with pain and a limp.

He presented to me a day after his injury.

He had focal tenderness over the anterolateral region of his right patella upper pole. There was a suggestion of a divet at that area during palpation.

I performed a bed-side ultrasound scan and it suggested an area of tendon discontinuity over the vastus lateralis insertion into the upper pole of the patella.

An MRI scan of his right knee was ordered.

The hinged brace allowed 0 – 30 degrees of knee flexion for the initial 2 weeks and it was gradually increased to full flexion over the following first 6 weeks.

This is his healed surgical scar. The contour of his muscle is restored.

Isolated vastus lateralis tendon ruptures are rare but a high degree of suspicion and low tolerance to investigate with MRI or ultraosund scans will help prevent missed diagnoses of such injuries.

Find out more about other related knee conditions and treatments from our knee specialist in Singapore.