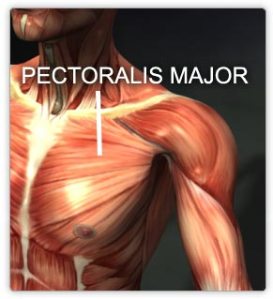 A 20 year old man was doing bench presses when he felt a painful pop in his left shoulder.

He had immediate pain in his left axilla (arm pit) and could not support the 115kg weights. His coach was able to assist him when the accident happened.

He was seen at the Emergency Department of a hospital near his home. The attending doctor ordered an x-ray of his left shoulder and told him that there was nothing “broken”. He was given a referral to see an Orthopaedist in 3 weeks’ time.

This patient decided to see me 3 days later as he was still having a lot of pain and his left upper arm was getting bruised.

The story that he told me with regards to his injury was typical of a rupture of the pectoralis major muscle or tendon from doing heavy bench presses.

In my patient, his left nipple was drooped compared to his right nipple. There was also loss of form of the pectoralis major muscle.

Notice the left nipple is drooped compared to the right nipple. This indicated a possible tear of the left pectoralis major muscle.

An MRI scan of his left pectoralis major muscle was performed. It confirmed a tear of the left pectoralis major muscle. The muscle and tendon usually rips off the insertion into the humerus bone. In his case, the tendon was still attached to the humerus bone but the muscle was torn in the junction between muscle and tendon (musculotendinous junction).

This is a drawing showing the normal anatomy of the pectoralis major muscle:

This is what has happened:

Surgery was done on the same day.

Failure to diagnose this injury followed by delay in surgical repair can result contraction and shortening of the torn muscle. This will make subsequent surgical repair very challenging.

This case serves to remind doctors that a high index of suspicion is required in order not to miss this diagnosis.